A community lift station in Southwest Florida received complaints from the local residents due to a prominent odor coming from the unventilated wet-well. The municipality reached out to Evoqua for a solution.

Evoqua investigated the lift station to evaluate the application and determine the best solution. A Vaporlink® hydrogen sulfide monitor was used to collect data from the wet-well over a 24-hour period. The chart below shows fluctuating H2S concentrations with an average of 338 ppm in the air.

Based on the data collected and characteristics of the system, a proposal was submitted to the municipality to control odors using a Whisper® Biological Odor Control Unit with Bioglas® Media.

The WHISPER® Biofilter is a one or two stage odor control unit that utilizes natural biological processes for optimal odor removal. Whisper units are designed for quiet operation with high odor removal, which makes them ideal for residential areas.

The WHISPER system was designed to operate at an air flow from 0-280 cfm, and under average H2S loadings of 300-500 ppm. A new packing material, Bioglas media, which is manufactured from recycled glass, was implemented in both the upper and lower beds to serve as growth sites for the sulfide oxidizing bacteria. 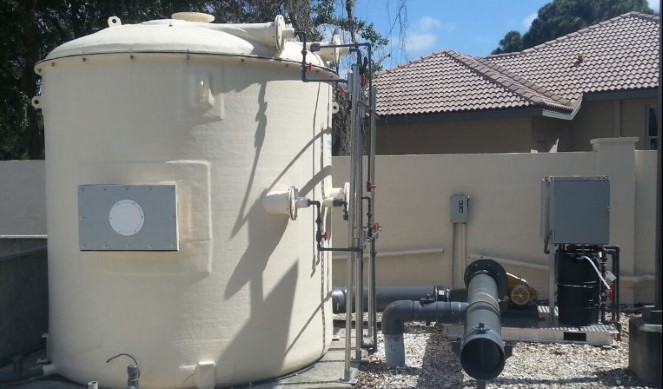 The Biofilter system was sized to exchange air in the wet-well six times per hour to achieve a 99% percent sulfide removal. Once the biofilter was installed, surveys of the system were performed over several weeks to measure performance. In the chart below, it can be seen that following a few days of start-up, the system quickly responded to sulfide in air pulled from the wet-well and began to remove H2S. By the end of the third week, our target goal of 99% removal was achieved and the system was fully acclimated. 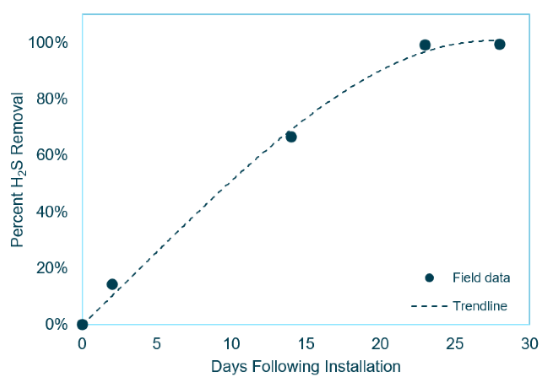 The Whisper® Biofilter using Bioglas® media was effective at controlling odors at the lift station. The system achieved over 99% sulfide removal within a few weeks from installation. The municipality no longer receives complaints from the local community and the odor problem has been resolved.