Evoqua Water Technologies LLC was contacted by a South Florida Municipality to provide an odor control solution for a lift station within their collection system. In the past, the municipality had implemented biofiltration for control of atmospheric hydrogen sulfide. However, in recent years the biofilter was removed, leaving the lift station untreated and exposed to high sulfide concentrations. As a result, the lift station was subjected to a substantial degree of corrosion as well as odor complaints from the surrounding neighborhood. 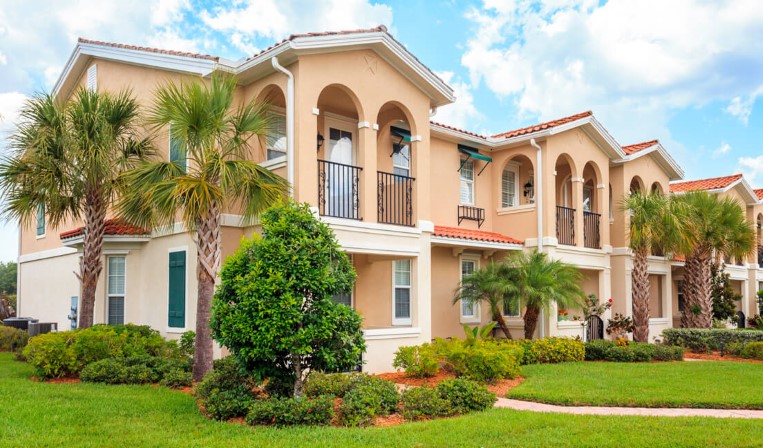 Alkagen® AQ Solution, which uses a pH shift technology, was recommended as the optimal solution for providing point source sulfide reduction within the lift station. As pH increases, hydrogen sulfide will shift into a non-volatile form that is unable to escape into the vapor phase. For typical wastewater (pH ~7.0), nearly 50% of hydrogen sulfide exists in this non-volatile form. However, at a pH of 8.5, more than 97% of the sulfide will be trapped in solution. Alkagen AQ Solution increases wastewater pH as needed to effectively trap hydrogen sulfide in solution and prevent escape into the vapor phase. 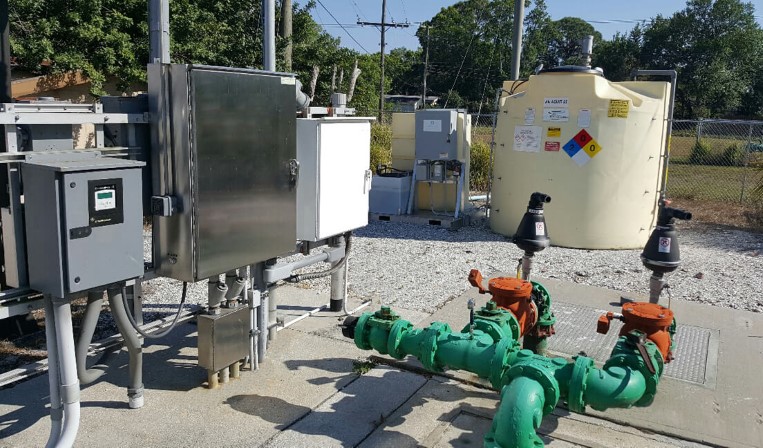 Alkagen AQ Solution is fast-acting and rapidly dissolves in wastewater, providing an almost instantaneous effect at the application point. This contrasts to magnesium hydroxide, which has to be added upstream to allow time for dissolution, sometimes requiring multiple feed sites.

With the Alkagen AQ system, a VersaDose® Dose-to-Demand advanced controller was used to carefully regulate the metering of chemicals by programming daily dose curves to match sewage flow rates within the system. By using the VersaDose Controller, Evoqua was able to maintain the desired pH set by the treatment objectives and prevent over-feeding and wasteful spending by the municipality.

Additionally, Evoqua deployed a VaporLink® remote monitoring device to continuously monitor sulfide concentrations within the wet-well. This capability allowed remote access to site specific data from any location with an internet connection. The VaporLink monitor and VersaDose controller were made accessible through Link2Site® Web Monitoring and Control system for real-time visibility and control. These technologies allowed for quick and efficient remote optimization of dosing to effectively reduce hydrogen sulfide.

Following installation and start-up, Evoqua optimized the Alkagen AQ feed system to meet the treatment objectives. The final adjusted feed rate was approximately 77 GPD. At this feed rate, hydrogen sulfide levels within the wet-well averaged 48.9 ppm while wastewater pH was maintained to an average of 8.45.

In order to demonstrate the effectiveness and rapid response of Alkagen AQ Solution, the feed system was temporarily shut off for 24 hours as seen in the chart below. Upon shutting off the system, hydrogen sulfide almost immediately returned to the untreated levels previously measured. Once the system was restarted, hydrogen sulfide concentrations promptly returned to the desired treatment levels.

With the treatment objectives being met, and the provided technology thoroughly proven, the municipality was confident in their decision to use Alkagen AQ Solution for odor and corrosion control at the lift station. 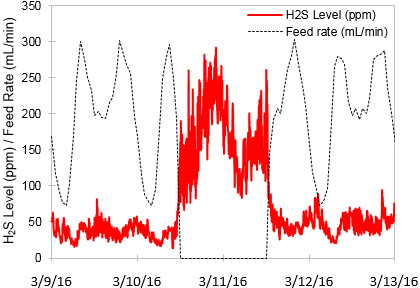 When the Alkagen AQ feed system was temporarily shut off, hydrogen sulfide levels spiked, demonstrating the effectiveness of the solution.

Odor complaints and wet-well corrosion at a prominent lift station 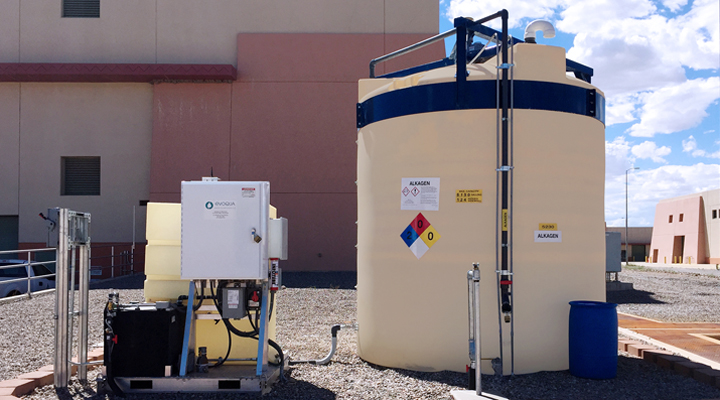 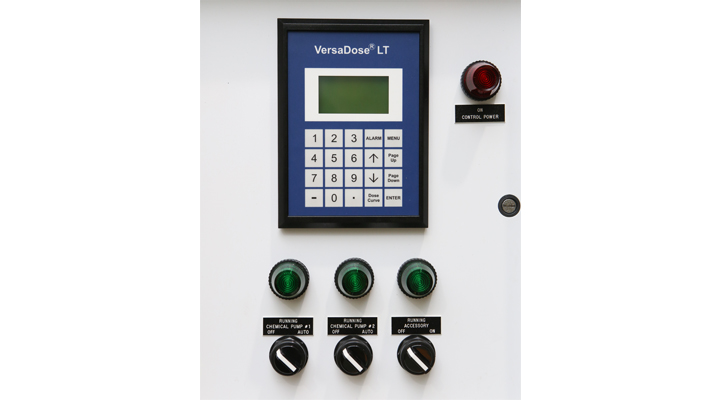