Pittsburgh’s renaissance as an innovation hub is driving demand for space along the Steel City’s riverfronts, once crowded with giant mill complexes. Developers are reclaiming and rehabilitating these sites for office, retail, research and high-tech manufacturing; all with an eye toward maintaining the health and appeal of a newly vibrant waterfront. The latest of these projects is taking place in the city’s Hazelwood neighborhood, which hugs a bend in the Monongahela River just upstream from downtown Pittsburgh. There, a new office/ lab complex is rising that will house a robotics and industrial tech research institute.

Installing new sewer and other underground utilities for the project required dewatering the soil on the site and treating the water for contaminants left over from nearly a century of blast furnace and steelmaking operations. As dewatering progressed, the contractor encountered two main challenges: high turbidity and unexpected concentrations of the VOC trichloroethylene (TCE), which necessitated additional treatment before the water could be discharged according to permit.

With tight deadlines, the contractor brought in tanks for storing the effluent, intending to truck the water offsite for treatment and disposal. But as storage tanks multiplied on the site, congestion and costs started adding up. For transportation alone, the contractor faced an estimate of more than $1 million for two dozen 21,000-gallon tanks of water. 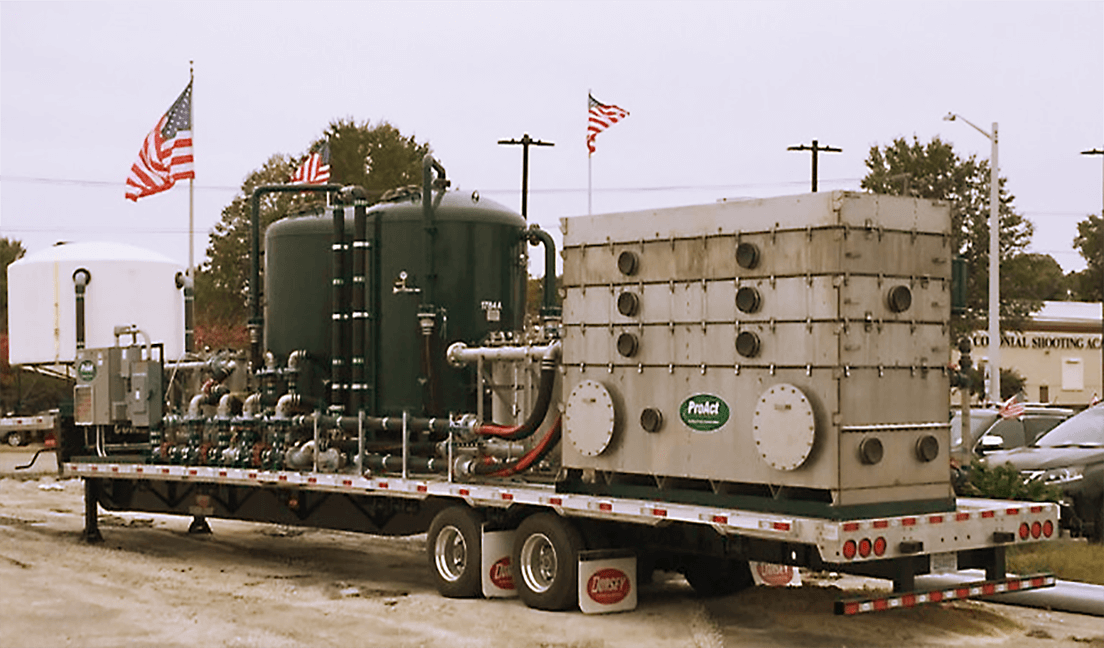 Upon calling Evoqua, the contractor learned of a solution that would mitigate a significant portion of these costs: onsite integrated air stripping.

The application’s high VOC content made it a prime candidate for air stripping technology, where dissolved gas is separated from water by a highpressure air stream, then discharged into the atmosphere. Evoqua’s STAT 400 Filtration Trailer integrates a compact, self-contained air-stripping system with supporting equipment in a trailer unit that can be set up quickly on site and begin processing immediately. Evoqua is a leader in providing solutions like this that combine advanced filtration, mobility and fast response.

In the Hazelwood application, a bag filter was used upstream from the air stripper to treat turbidity, and a two-stage carbon polishing unit followed by a second bag filter were used downstream for an extra margin of safety before discharging the treated water into the environment. All components were integrated and delivered as a single trailered package. Daily testing assured that the output water complied with permit limits. In this application, air stripping eliminated transportation costs, reducing overall treatment costs by a factor of ten. In addition, it proved more cost-effective than on-site carbon treatment for TCE, because it significantly reduced carbon media exchange costs. Fast response was also an important reason the customer chose Evoqua. Evoqua turned around the proposal within 24 hours and delivered the solution to the site a few days after approval.

By directly separating the TCE into the atmosphere, the Evoqua STAT 400 unit reduced the need for carbon media exchange to an absolute minimum. And by treating all the water on site, it eliminated the heavy costs of transporting it to an offsite treatment facility, a factor that would potentially have escalated costs tenfold.

The Evoqua STAT 400 unit, which reduced the need for carbon media exchange to an absolute minimum. By treating all the water onsite, it eliminated the heavy costs of transporting it to an offsite treatment facility