Südzucker produces 5.4 million tons of sugar a year. Situated in Obrigheim, located in the Palatinate region, the Offstein Sugar Factory is one of the largest and oldest of nine sugar factories in Germany. Yearly, 1.4 to 1.8 million tons of sugar beets are processed. During the harvesting campaign (September to December), this is about 16,000 tons of beets daily - around the clock. Syrup and sugar are produced from the beets. A part of the syrup is temporarily stored and later processed into white sugar. Cooling water, among other things, is required for the production process. For this, there are cooling circuits in which the cooling water is cooled down by means of cooling towers. To prevent the microbial contamination of the cooling water, chlorine dioxide is a perfectly suitable disinfectant. Chlorine dioxide as a means of disinfecting cooling water is already being deployed at multiple Südzucker factories – at the location in Obrigheim in two closed cooling circuits. While up until now chlorine dioxide has been used as a ready-to-go solution, an alternative to the continuous production of chlorine dioxide has been sought after.

In order to continually generate chlorine dioxide, the decision was made for the DIOX-A 5000 chlorine dioxide generator by Evoqua Water Technologies. The completely reworked system with a capacity of 5 kg/h max. is consistent with all installation and workplace safety requirements. Both the mechanical construction as well as the controls have been newly designed. The generator, which produces the chlorine dioxide according to the chlorite / hydrochloric acid principle, has been approved as a drinking water disinfectant according to drinking water regulations. From the concentrated solutions of sodium chlorite (24.5 % NaClO2) and hydrochloric acid (30 - 38 % HCl), after mixing with a double injector in the reaction chamber, a watery chlorine dioxide solution is prepared. The double injector assures that the concentrated chemicals do not come into contact in undiluted form. 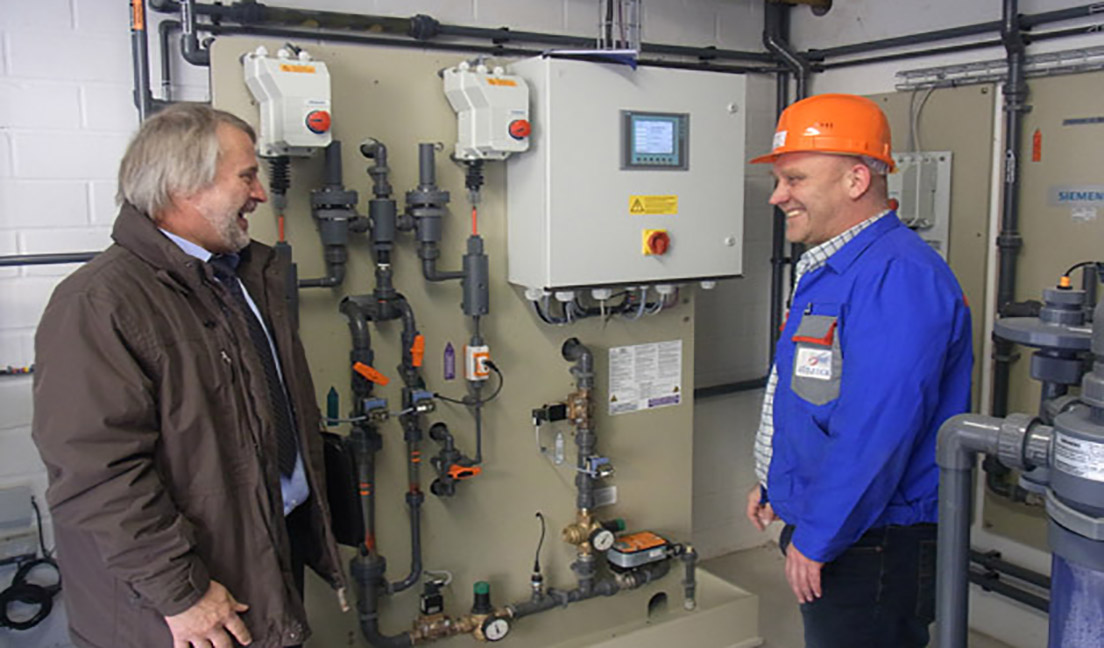 As backfeed water, an almost fully deionized water is used to prevent the build-up of salt in the cooling circuit. To control microbial growth, an excess of 0.06 mg/l of disinfectant is sufficient. The chlorine dioxide solution is metered into the cooling tower basin. The cooling circuit is run 365 days a year. 40 m³/h blowdown is fed to the waste water treatment facility. In this way, the accumulation of chloride is prevented and a stable neutral pH level is ensured.

This cooling circuit is in operation for around 100 days and once again for approximately 50 days long. The condensed steam in the cooling tower, the exhaust condensate, is continuously discharged over an overflow. This amounts to 50 m³/h. This exhaust condensate has a COD (chemical oxygen demand) of 200 to 300 mg/l. The pH level in the cooling water is 9. Also here, an excess of 0.06 mg/l of chlorine dioxide is targeted. The chlorine dioxide solution is likewise metered into the cooling tower basin. Chlorine dioxide ensures a very good disinfection effect even at this high pH level.

Finding a system that is consistent with all installation and workplace safety requirements.