The Western Treatment Plant (WTP) in Werribee (in Melbourne’s west) is a world leader in technical and environmental innovation. The site treats half of Melbourne’s population’s wastewater, is one of Australia’s most important wetlands for waterbirds, and is listed under the international Ramsar Convention.

Melbourne Water’s WTP has been harnessing the value from biogas for more than 25 years. Floating lagoon covers collect methane-rich biogas from the site’s primary treatment lagoons for renewable energy conversion and odor management. Collecting the biogas for conversion to green energy is a huge benefit for the environment by eliminating the emission of methane, a notorious greenhouse gas, and reducing the demand for power from other sources. An added benefit of the lagoon covers for the plant staff and surrounding community of the facility is the management of odor produced from the treatment process.

In early 2015, Melbourne Water identified the need to replace the biogas cover of the 25W lagoon system as it was coming to the end of its service life. The replacement cover was to stand up to the harsh and rugged environment and provide o​perational efficiencies from the original system.

The new cover has an eastern and western section connected by a dual arched central panel referred to as the “bowtie.” Each section of the cover operates independently. The independent operation allows for maintenance and cleaning of various segments to take place while other segments remain in service managing odor and collecting biogas.

The unique design was required to allow Melbourne Water to remove sections to pump the accumulation of sludge and floating materials that collects under the cover. The eastern section of the cover accepts the influent and consists of four segments. Each segment can be removed and replaced to facilitate debris, sludge removal, and ongoing maintenance. The cover includes access and inspection ports for sludge management while the cover remains in place.

The biogas pipework included two headers for the eastern and western sections. Each cover segment has dual connections with isolation valves. Instrumentation was installed to provide pressure readings to a PLC system for biogas flow control, while condensate and vent systems are vital components of the pipework to provide reliable delivery of biogas. 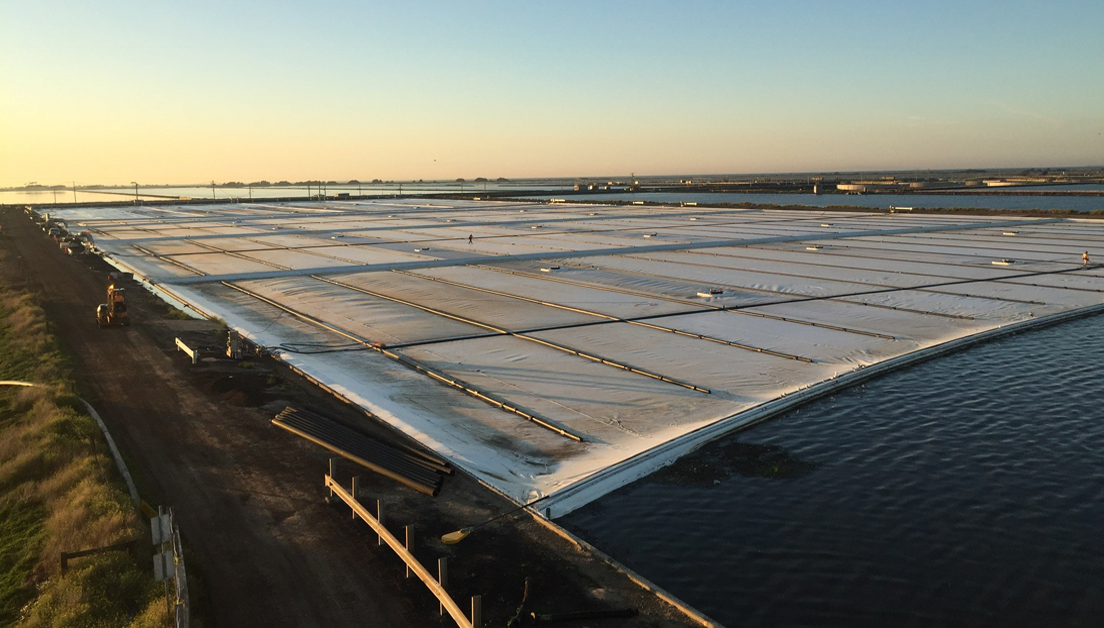 The economic, environmental, and social benefits of the replacement cover are evident. The cover collects over 60,000 m³ of biogas per day worth over $3,500,000 AUD per year, and contributes to generating over 40% of the site’s electricity requirements for treatment processes. The site’s greenhouse gas emissions are substantially reduced and odors are minimized.

Melbourne Water and​ Evoqua’s Geomembrane Technologies have a longstanding relationship. Nearly two decades ago, we supplied two covers and a biogas handling system to the WTP, and ​have been involved in various upgrade and maintenance projects at the plant since. ​Evoqua’s Geomembrane Technologies is proud to work with forward-thinking, environmentally responsible companies such as Melbourne Water.