The increased treatment capacity meant that the plant could treat more wastewater—but with that came the threat of more odors. In response to concerns from neighboring properties, part of the expansion project included upgrading the WWTP’s odor control measures. The plant wanted a cover solution that would address odors without hindering access for maintenance and sampling.

Evoqua’s Geomembrane Technologies was selected to custom-design and supply 49 structurally supported covers for the WWTP. The project consisted of 24 covers for the plant’s primary clarifiers, nine covers for its launder tanks, and 16 covers for its equalization tanks. These tanks are all part of the early stages of wastewater treatment when odors are at their most intense, so it is crucial that the tanks be securely covered. The retractable covers are tensioned across a low-profile aluminum arched frame spanning the tank opening, but can easily be rolled open.

Evoqua’s Geomembrane Technologies worked closely with plant operators and management at the WWTP to entirely customize the new tank covers. Removable handrails and panel plates were incorporated into the cover design to keep workers safe while maintaining the width of the existing walkways. ​Evoqua’s Geomembrane Technologies also customized the covers to create larger openings so equipment within the tanks can be lifted out when required. 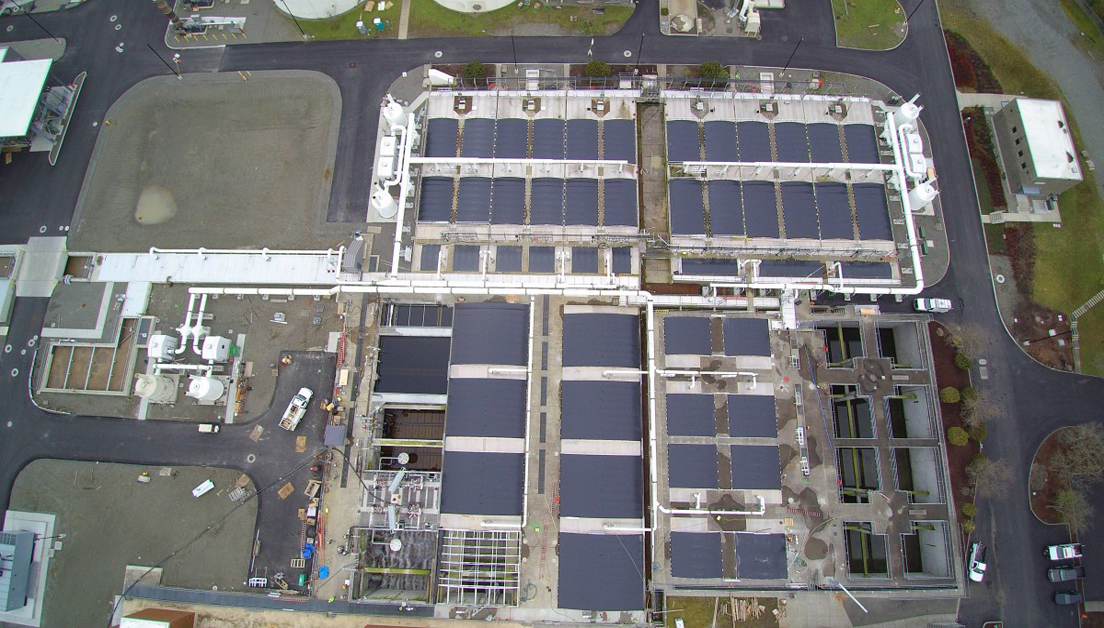 The covers​ have helped minimize odors as intended. Odor from wastewater treatment is reliably contained within the tanks so that it can be removed and treated, helping to reduce complaints and maintain a positive perception of the plant in the community. Since Evoqua’s Geomembrane Technologies™​ brand covers are more airtight than other cover options, the duct and blower sizes could be reduced, saving both capital and operating costs.

As an additional benefit to the WWTP, ​the Evoqua Geomembrane Technologies™ brand removable guardrail system provides the safety of a guardrail without monopolizing space on the walkways. This is because a significant portion of the guardrail is mounted in sockets located inside the cover. Those who work at the plant can still perform their regular duties and access the tanks’ internals by simply retracting the covers.

Custom-design and supply 49 structurally supported covers; consisting of 24 covers for the plant’s primary clarifiers, nine covers for its launder tanks, and 16 covers for its equalization tanks