After years of operating successfully in the community, the City of Bridgeport’s WPCA developed an odor problem at its East Side Wastewater Treatment Plant. It was an exceptionally hot summer, and the plant’s expansion/refurbishment project had taken one-third of the treatment plant facilities out of service. Equipment that was still in service was old and near the end of its life. The plant was operating with a diminished air supply in its process air blowers, and a major user expanded their demand for treatment services. This significantly changed the characteristics of the wastewater received for treatment, which contributed to the odor problem.

The odor complaints put the treatment plant in the community spotlight. The extent of the problem was obvious to everyone, especially neighbors in condominium developments, marinas, and industrial/commercial operations surrounding the treatment plant. The situation reached the point where the State of Connecticut issued a Consent Order, directing the WPCA to eliminate the odor.

In response, the WPCA commissioned an odor study. The study identified potential sources of odor and recommended a plan of action. The initial recommended solution was a “capture-and-treat” approach involving several fixed covers over primary clarifiers, influent and effluent channels and various skimmings pits, and a central odor treatment system.

After consulting with its engineering advisors and operating staff, the WPCA concluded that although the proposed solution was technically sound, the fixed covers did not address the operational need for regular access to the tanks to observe the treatment process, inspect equipment, and take samples. Also, since the odor sources were dispersed around the plant property, there was a concern that an elaborate and expensive piping system would be required to bring the odorous off-gas to a central treatment system.

A search was initiated for a cover system that allowed better tank access and a treatment system better suited to the dispersed odor sources. A solution was critical, but so were cost concerns. In an effort to meet both operating and cost requirements, the WPCA investigated various cover systems and chose a solution consisting of three different cover styles.

The WPCA chose a retractable, structurally supported cover system manufactured by Evoqua’s Geomembrane Technologies for the influent channel and primary clarifiers. The structurally supported covers met the operational need for regular and unencumbered access to the tanks. They consist of durable, coated fabric tensioned over a series of low-profile aluminum arches which span each tank opening.

The fabric cover is sufficiently airtight to capture the off-gases for removal to the treatment system, yet it can be detached on three sides and retracted to expose the tank contents for easy inspection or maintenance. The arched shape means that rain or snowmelt runoff automatically drains to the tank perimeter.

Evoqua’s Geomembrane Technologies worked with the WPCA and its advisors to add several customized features that made the operator’s job easier and simplified connections to the odor treatment system.

Skimmings pits are covered with Evoqua’s Geomembrane Technologies™ brand suspended covers. The irregular shape of the pits, and the many pipe and cable penetrations, made these high-strength, flexible, tensioned fabric covers a good choice.

Odorous air captured under the various cover systems is exhausted to individual prepackaged carbon filtration systems which are installed beside each odor source. WPCA staff also addressed odors from the sludge storage tanks. The headspace in the tanks is used as an inlet air source for a mixing air blower system in the plant’s chlorine contact basin. Sludge odors are oxidized as the air curtain mixes the wastewater.

The WPCA found that this solution has a double benefit: a cost saving in not having to run a pipe network from each odor source to a central treatment facility, as well as the flexibility to add more covers and treatment systems in the future, if required.

Following installation of the covers and odor treatment systems, the odors were brought under control at the East Side Wastewater Treatment Plant. The WPCA and the surrounding community have returned to a harmonious relationship. 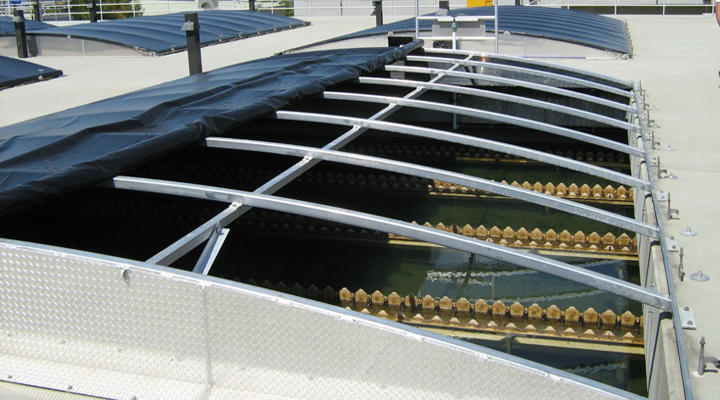