The South Dearborn Regional Sewer District in Lawrenceburg, Indiana, provides regional wastewater treatment services for three cities and an international distillery. The 6 mgd treatment plant is located in an area of high population growth and is surrounded by many retail operations and other commercial developments. In addition, a heavily traveled state highway runs by the treatment plant.

As the community grew, wastewater treatment plant managers at the South Dearborn Regional Sewer District saw an increase in complaints from neighbors about a foul smell lingering in the area. Odor complaints became a sensitive issue and the district sewer board knew the problem needed to be addressed.

The district’s initial attempts to treat or mask odors coming from the primary clarifiers were unsatisfactory. “The district could manage odors for six and a half days in a week and then have an unexpected ‘odor event’. Then the telephone calls would start again,” says Dennis Feichtner, District Superintendent of the South Dearborn Regional Sewer District. It became apparent that neighbors’ perceptions did not change so long as odors were occasionally present.

The district sewer board was committed to solving the problem. With the assistance of the district’s consultants, GRW Engineers Inc., the board evaluated alternative approaches to odor control and decided to purchase covers that would work with a ventilation and scrubber system to positively capture, remove, and treat odorous gas. A cover system was needed to reliably capture and contain odorous gas while providing features that met the district’s operational needs.

After researching several cover systems, the district chose structurally supported covers fabricated and installed by Evoqua’s Geomembrane Technologies. A customized cover design was an attractive choice for the district. Other factors included the company's ability to deliver a quality cover system at competitive price while fitting within the constraints of the existing infrastructure.

Each clarifier is now covered by a high-performance coated fabric tensioned over a series of aluminum support arches placed along the length of the tank opening. This industrial cover fabric is proven to be effective in a wastewater environment and also features UV protection.

Aluminum walkways divide the fabric covers into manageable sections which can be easily detached on three sides and rolled up along the support arches to expose the tank interior for inspection or maintenance. Hatches in the walkways are located at key points to provide access for a single operator to take samples, inspect equipment, tip scum troughs, etc.

The level of cooperation between the plant operators and the installation crew was excellent. The district superintendent and plant operators took an active role in planning and installing the entire odor control system. With this assistance, the covers were installed in less than a week—without taking the clarifiers out of service. 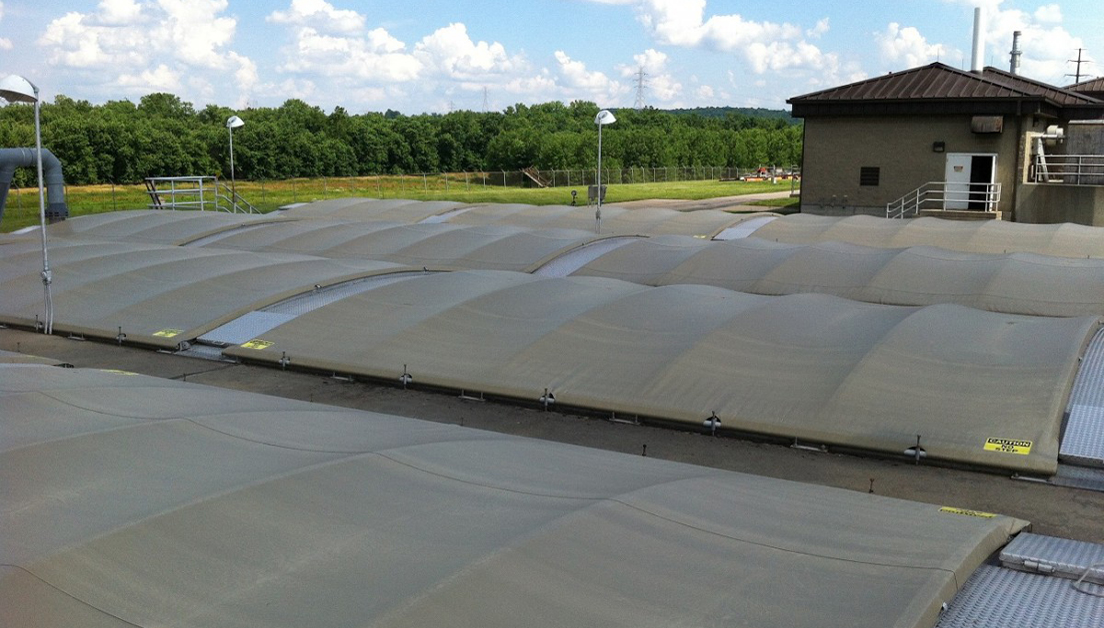 Thanks to a blower and underground piping system between the covers and the scrubber, the district is now able to capture and treat odors from its headworks, primary clarifiers, and belt press building.

Evoqua’s Geomembrane Technologies addressed constraints imposed by the physical configuration of mechanical and electrical systems associated with the existing clarifiers. The cover design was modified to fit within these constraints, which saved the district from having to incur the additional cost of changing the existing system.

Easy access to the tank interior is a key benefit for the district’s plant operators. The need for complete tank access is not always part of a planned maintenance activity; sometimes access is required quickly because of mechanical problems. The ability to easily retract the covers without the aid of lifting equipment carries a significant time-saving advantage, especially in the case of an emergency.