Bowling Green Municipal Utilities (BGMU) provides commercial water and wastewater treatment and electrical power services to a population of more than 60,000 in the community of Bowling Green, KY.

In 2010, the BGMU wastewater treatment plant was approaching the end of its useful life, just as the utility’s operating permit was up for renewal. Built in 1963 and expanded in 1974 and 1993, the plant was approaching its capacity limit and would not be able to meet the city’s future wastewater needs. The existing treatment process also could not meet the seasonal limits for ammonia nitrogen that the renewed permit would require.   With that in mind, BGMU began to look at treatment designs that would handle population growth and provide flexibility into the foreseeable future.   The new system also would need to handle growth, but also remove nutrients such as ammonia nitrogen (Ammonia-N), total nitrogen (TN) and total phosphorus (TP).

In addition to capacity and nutrient removal, BGMU also faced a footprint challenge.  The existing treatment site provided no room to expand from to provide 10.6 million gallons per day (MGD) to 12 MGD immediately, with potentially to 15 MGD in the future.

BGMU turned over their treatment requirements to the engineering firm, Gresham Smith and Partners. The team considered a variety of options for treatment, with the OMNIFLO® SBR, with Jet Tech technology emerging as having the best potential to meet BGMU’s space, capacity and capability requirements.  As a batch process, the OMNIFLO® SBR accomplishes equalization, aeration, and clarification all in the relatively small footprint of a single reactor basin.

Completed in 2012, BGMU’s new facility is built around four basins with the capability of treating over 13 million gallons per day.  Each SBR basin cycles through discrete treatment steps, including fill, react, settle, and decant. For aeration, BGMU opted for jet aeration over fine bubble diffusers because of the easier maintenance and longer lifecycle value in this application. All electro-mechanical components are located outside of the basin, so that any maintenance can be performed without draining the basin. Operators can achieve simultaneous nitrification-denitrification and biological phosphorus removal by varying the amount of oxygen introduced to the system, all with the jet aeration system; no additional mixer is required.

The compact footprint of the four OMNIFLO® SBR reactors leaves room for an additional two reactors to be built in the future to expand capacity to 18 MGD.

Anchor the new plant with a four-basin OMNIFLO® SBR system that can treat up to 12 MGD and meet new limits for CBOD, TSS and Ammonia-N 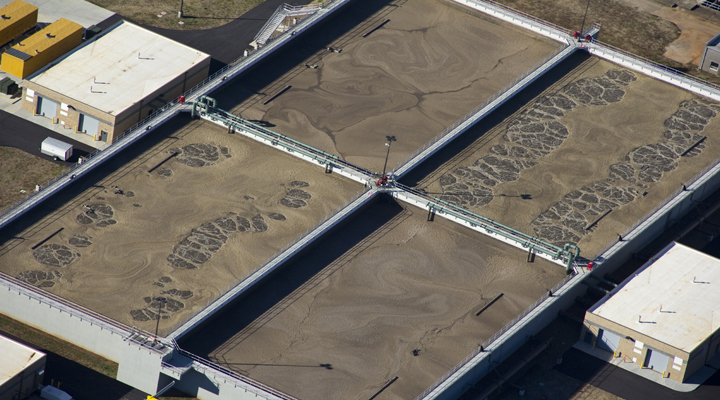