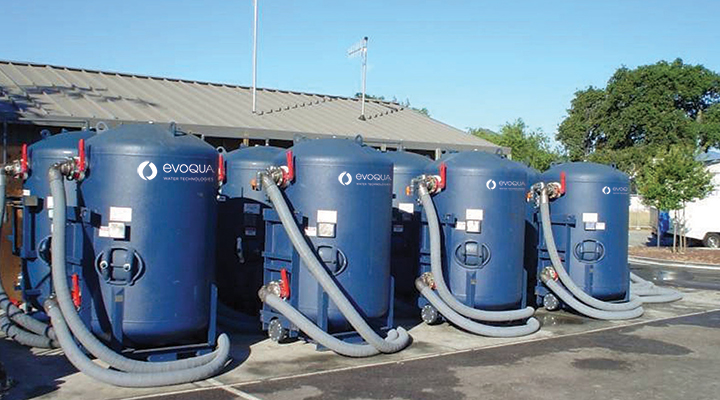 Mobile and emergency ion exchange solutions to remove PFAS, metals and other inorganic compounds from water.

Atoms with a positive charge equal to the negative charge are said to be neutral. Sometimes, an atom will lose or gain an electron, and is then in an “ionic state.” An ion is an atom or molecule that is electrically charged. Cations, having has lost a negatively-charged electron, are positively charged. Anions, having gained an electron, are negatively charged. Cations and anions are attracted by their opposite electrical charge. Ion exchange exploits this tendency to pull ions out of a solution. Ionic compounds from a water or solvent stream are captured on the ion exchange media (“resin”).

Dissolved metals often exist in one or more ionic states. An ion-exchange resin has ionically-active sites distributed through its structure. When a solution (water or a different solvent) with dissolved metals passes through a resin bed, the resin attracts and holds oppositely-charged metallic ions by exchanging electrons at these exchange sites.

Some resins can be regenerated and re-used. Regeneration involves passing a regenerant solution over the resin to displace the contaminant ions from the exchange sites. The liberated ions pass from the resin bed into solution. Waste solution generated during regeneration has high levels of contaminants and require safe treatment and disposal.

Other than flow rate, the ion exchange systems effectiveness is largely determined by the influent solution’s chemistry and physical characteristics. Typically, ion exchange works best when the influent’s suspended solids are less than 10 ppm, pH is between 4 and 8, and oil and grease concentrations are low. Pretreatment is often needed before the ion exchange vessels to ensure the most efficient use of the ion exchange resin.

Evoqua offers a full range of services to see your project through from beginning to end. Our engineers can design a treatment system best meet the project’s specific needs. Ion exchange media is chosen to remove specific target contaminant chemicals from solution. We deliver and install the media vessels and loads the ion exchange resins into the vessels. If needed, we can design and install equipment to protect the system from freezing. Power is needed to pump water through the resin; if none is available, we can supply a generator. We operate the system on site, or install remote system monitoring and communication so clients and technicians can monitor and control the system from off site or on site.

We have used ion exchange at mine sites, coal-ash ponds, construction sites, remediation sites and in other applications. We provide bench-scale and pilot-scale testing, system design, installation, and operation to meet stringent discharge requirements.

Contact us to find out more and discuss the detail of your project!