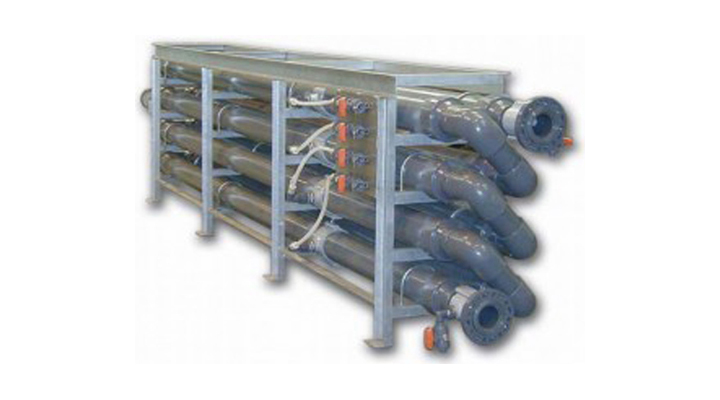 The FT-Series Flocculation (Floc) Tubes are hydraulic flocculators that use the energy of the wastewater flow to mix the wastewater with chemicals, encouraging coagulation and flocculation. Floc tubes are commonly used prior to Dissolved Air Flotation (DAF) systems. The floc tubes are constructed from PVC or CPVC pipe, with each unit having pipe of two different sizes to improve performance over a wider range of flows. The larger of the two pipe sizes is used in the straight pipe runs to provide gentle mixing and increase the hydraulic retention time. The turns are constructed using the smaller pipe size to increase mixing and backmixing.

Applications
FT-Series Floc Tubes are used for a variety of applications where chemicals are mixed with waste streams to facilitate coagulation and flocculation prior to a separation process:

Theory of Operation
Most of the mixing action in the floc tube is achieved in the turns, constrictions, and expansions, as shown in the figure below. The restriction and expansion of pipe size causes additional turbulence and numerous eddies in the flow pattern. These eddies, when combined with the changes in flow direction at the elbows, disrupt the velocity gradient and flow patterns, providing significant radial mixing as well as axial backmixing. In addition, some radial and axial mixing is achieved in the straight sections due to the turbulence of the fluid in the pipe. Our floc tubes are sized so that flow in the straight sections is well into the turbulent flow regime (NRe>50,000).

Why is backmixing important in a flocculation tube? Many chemical metering systems are pulsed, that is, the chemicals are metered in pulses instead of being injected as a continuous flow. If the water inside the floc tube is flowing at a certain velocity and the pump is injecting chemicals at a certain number of pulses per minute, there will inevitably be portions of the flow that are not directly dosed with chemicals. Such a situation would result in some portions being overdosed and some being underdosed, increasing chemical usage and decreasing treatment efficiency. Backmixing helps to distribute chemicals more evenly while providing the agitation necessary for effective flocculation.

FT Models
The table below lists the recommended flow ranges and dimensions of standard floc tubes. Alternate configurations can be designed if needed. Models FT-43 and smaller use Schedule 80 PVC pipe, while larger models use Schedule 40 PVC pipe. Floc tubes for higher temperature flows can be constructed with CPVC piping. Standard frames are constructed from galvanized carbon steel and may be provided in stainless steel if desired. The units come with a standard of three injector ports complete with check valves and shut-off valves. The units can be customized with additional injector and sampling ports and various orientations.