Norfolk Naval Station is the world’s largest naval station, supporting 75 ships and 134 aircraft alongside 14 piers and 11 aircraft hangars. It houses the largest concentration of U.S. Navy forces. Port Services at Norfolk controls the movements of more than 3,100 ships annually as they arrive and depart their berths.

While the ships are in port, the Navy provides land-based feed water treatment for their boiler systems since it’s more cost effective and efficient to demineralize municipal water than it is to treat seawater with an on-board system. The quality of the demineralized feed water is critical to shipboard boiler systems because it directly affects the efficiency of a ship’s propulsion system, which is a critical component of the ships’ readiness and fitness for duty.

In 2015, the Navy was experiencing inconsistent quality in demineralized water provided by its incumbent supplier and needed to make a change in this service. The Navy needed a responsive, reliable source of consistently high-quality demineralized water to meet its readiness commitments and to keep operations running smoothly. 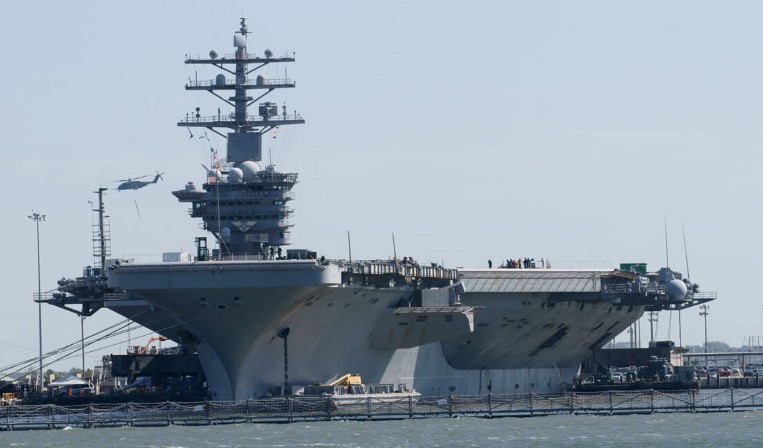 The six Mobile units were designed and built to the Navy’s specifications. Key design elements included 150,000-gallon capacity and a compact footprint to meet the Navy’s need for maneuverability around the congested dock area. The units receive municipal water from Norfolk County, process it through Evoqua’s advanced resin media and feed it to polishing stations for use in the ships’ boiler systems.

Built on trailer chassis, the mobile units can be positioned on the docks to service military and civilian ships in port. The mobile design also makes it easy and efficient for Evoqua drivers to haul the units to Evoqua’s regeneration facility in nearby Richmond, Virginia when resin media is exhausted.

Evoqua Mobile services allow customers to meet their treated water needs without on-site waste generation, hazardous chemical handling or capital investment. “The Navy needed a fast, flexible team to meet the unique requirements of a facility this size,” said Rodney Aulick, Evoqua’s Industrial Projects and Services Division President. “We’re proud that, due to our proven record and fast, high quality response, we are able to play a role in helping maintain U.S. readiness.”

The world relies on the readiness of U.S. defense forces to respond to crises around the world. A key component of that readiness is the American naval fleet and the many services that maintain its ability to respond at a moment’s notice. With solutions like the Mobile Demineralization system, Evoqua Water Technologies is ready — and proud — to be a part of this important effort.