The James River Treatment Plant is one of nine major treatment plants operated by the Hampton Roads Sanitation District (HRSD), a political subdivision of the Commonwealth of Virginia. Located in Newport News, Virginia, USA, the James River Treatment Plant is committed to protecting the environment and enhancing neighboring communities through a variety of wastewater treatment improvements.

The HRSD staff investigated the complaints and worked with neighbors to identify the odor source. An air specialist at the HRSD took samples from various areas at the plant, and even went so far as to bring sample bags to neighbors. Nocardia foam from the aeration tanks was found to be the culprit.

Plant management made a commitment to neighbors that the odors would be addressed.

The plant retained CH2M HILL as its advisor to help solve the odor problem and a decision was made to capture foul air under a cover system so that it could be withdrawn and treated in a carbon system.

A variety of covers were considered. One plan involved covering one portion of the Integrated Fixed Film Activated Sludge (IFAS) tanks with fixed concrete decks that would serve as both covers and mounting surfaces for the scrubbers, and covering the other portion with retractable fabric covers that would provide convenient access to the tank internals. Plant staff participating in the design process noted that they needed to easily access mixers, media, and the spray system within the IFAS tanks.

Plant workers needed the ability to inspect aeration patterns, clean out anoxic sections, and get inside the tanks, when required. These access requirements, along with the possibility of excessive loads that could be imposed on tank walls by concrete lids and scrubbers, led to the decision to design for an alternative scrubber location and cover the tanks entirely with retractable fabric covers instead. 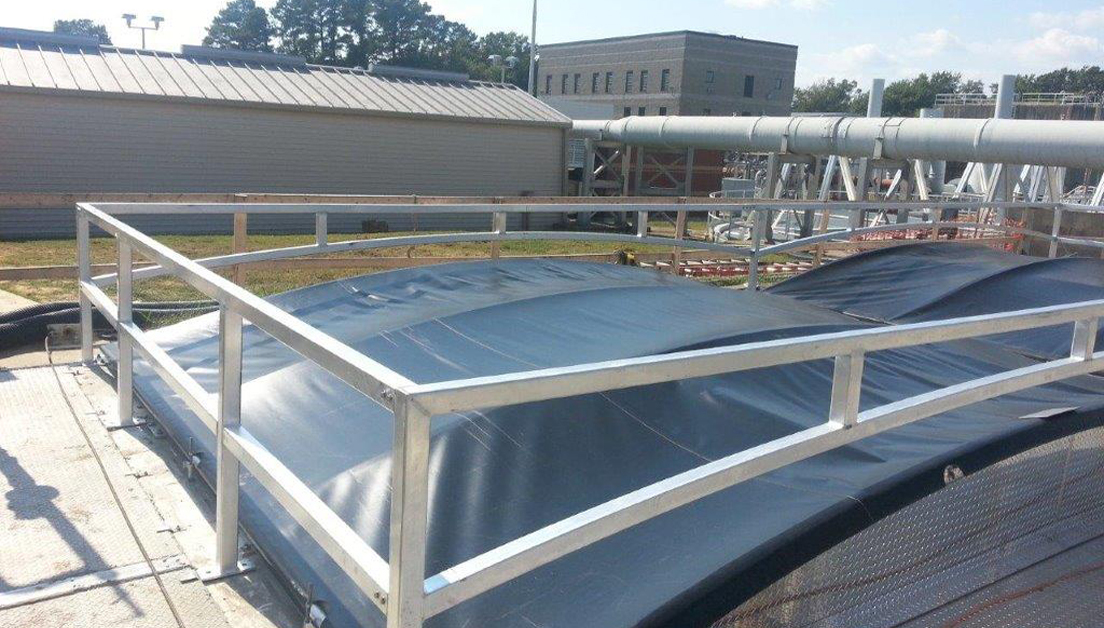 Later, an ANITA™ Mox treatment system—the only one in the USA right now—was installed to extend the plant’s nutrient removal efforts. The ANITA Mox tank also required a cover for odor control, and because the tank contains mixers, media, and heaters, easy accessibility was again an essential requirement.

The James River Treatment Plant was mindful to address the odor control issue aesthetically. For example, it was logical to locate the scrubbers near the covers, but it was also important to consider the neighbors’ view. Care was taken in choosing a location for the scrubbers near the tanks, but out of the neighbors’ sight. The covers are low profile and reliably control odors while still providing easy access to tank internals, which was crucial to plant staff.

*ANITA is a trademark of VEOLIA WATER SOLUTIONS & TECHNOLOGIES. All other trademarks are those of their respective owners.

Plant had installed odor control systems to capture and treat foul air from parts of the plant, its conventional aeration tanks were producing low-level odors that required additional control