A medical center in Georgia needed filtration for its three 400 ton cooling towers due to fouling/corrosion issues, silt and organic accumulation in the basins resulting in Legionella habitat buildup, and replacement of cooling tower fill due to plugged fill channels from unfiltered cooling water.

Originally, sand media filtration had been specified for the medical center‘s cooling tower system. The objective was to clean the basins directly before any debris had a chance to enter the cooling system and reduce the habitat for Legionella bacteria living in the deposits in the basin. After reviewing the media system with the mechanical engineering firm assisting with the project, a self-cleaning screen filtration technology was determined to be a better fit for this application for the following reasons:

Evoqua's VAF LCFX system was selected as the system of choice for the following reasons: 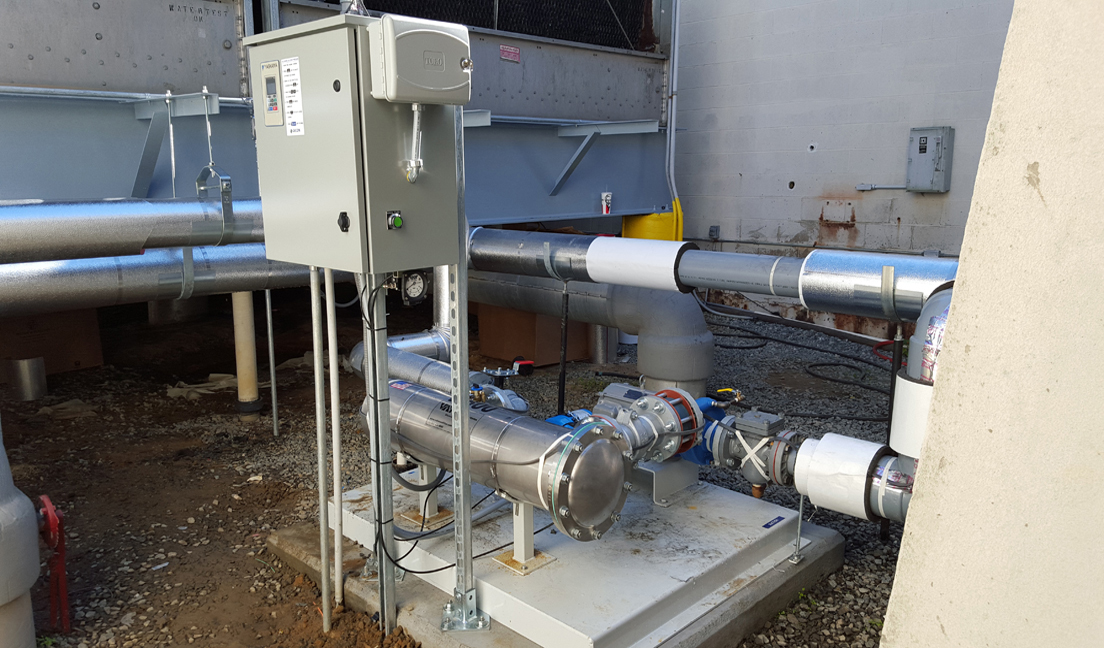 The LCFX system has unsurpassed operating efficiencies over conventional cooling tower filtration systems while providing both basin agitation and cooling water cleaning. By combining the patented* technology of VAFTM filters and the reduction in energy usage and water saving components of the LCFX system, an ROI can be achieved in less than a year. The sophisticated zone control technology combined with variable-frequency drive (VFD)/programmable logic controller (PLC) for the pump allow for one system to clean multiple cooling towers at a low pressure and flow rate. The zone control system maintains a pressurized mainline that has zone control valves placed at each defined zone. Each zone has a specified number of turbulator agitation nozzles placed inside the basin that agitates particulate and keeps it in suspension for removal by filtration. The VFD/PLC provides energy efficiency by operating the pump only at the minimum 1.4 bar (20 psi) required for the turbulator nozzles agitation and then provides the minimum of 2 bar (30 psi) required for the filter’s 30 second flush cycle thus maintaining low energy usage for an extended period of time.

In addition, this system reduces the buildup of organics and silt found in the basin, which will help inhibit the growth of Legionella. Reduction in manual cleanings is also accomplished and corrosion/fouling issues are also noticeably alleviated.

*Patented in some countries

Provide a filtration solution with a small footprint, reduced water usage for backflushing, limited energy requirement, and must address fouling/corrosion issues and Legionella concerns of the customer

Whether you are reviewing an established HVAC water treatment process or looking to build a new cooling tower, our team of water quality experts can help you meet your water treatment goals.