An energy service provider designed and built a new district energy center in the state of Louisiana. The facility provides more than 33,000 tons of chilled water and air conditioning to more than 12 million square feet of commercial property that encompasses 15 square city blocks.

Recent weather storms were negatively impacting the district energy’s large thermal chilled water supply, leading to poor water quality. The use of traditional media ﬁlters were ineffective in reducing their high levels of total suspended solids (TSS), as a result they wanted a better understanding of the Vortisand® system and its capabilities. It was determined that the best solution to ﬁltering the large volume of water would be the use of a 300 gpm Vortisand submicron ﬁltration system.

A standard laser particle analysis illustrated that 80% of the TSS was less than 5 micron in size, making the current traditional 5 micron sand ﬁlter inefﬁcient at reducing their levels of TSS.

After just a few months of operation the system performed as expected. Maintaining their design efﬁciency and decreasing chemical usage has improved the bottom line every year, with an ROI of less than 12 months.

During a recent site visit, the director of plant operations stated he has never seen the chilled water this clean. The TSS issues that previously plagued the entire system never returned. Previously, their 15 heat exchangers had to be cleaned several times per year due to the increased bioﬁlm caused by the suspended solids. 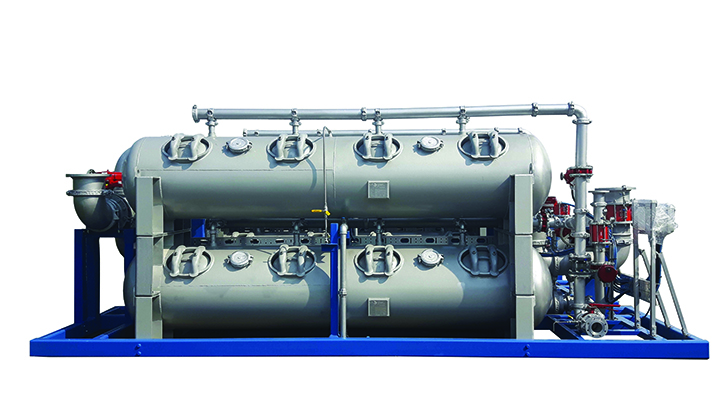