The Amsa Arisu Water Purification Center provides 1.60 million m3 of drinking water per day for 3.5 million citizens of Seoul City. The plant, built in 1986, produces top-quality water through state-of-the-art membrane filtration and advanced purification. The Amsa Arisu Water Purification Center is one of six purification centers operated by the Seoul Metropolitan Government to provide the approximate 3.2 million m3 of water required to serve 10 million citizens of Seoul each day.

Chlorination is both the first and final treatment steps. Chlorine is added at the facility's intake station to disinfect the raw water, and again following filtration for controlling and maintaining chlorine residual in water entering the city's distribution system.

Chlorine gas is delivered in bulk liquid, evaporated safely into gas, metered through a chlorinator and inducted into open channels. The plant had originally operated conventional chlorine dispersion systems (flash mixers) that incorporated injectors, diffusers, and mechanical paddle mixers to induce gaseous chlorine to flows at the two injection points. The resulting chloramines-laden air brought a highly corrosive environment for the externally mounted equipment and nearby metal surfaces, resulting in the formation of rust. These high corrosion rates brought continuous issues for facility maintenance personnel.

After searching for many years for a solution to the corrosion problem, management ultimately determined that increasing and optimizing mixing energy using an entirely submersible system could help to ensure thorough chemical induction and dispersion while also reducing the corrosive environment at the facility’s two chlorine addition points.

In 2007, the Amsa Arisu Water Purification Center installed two Water Champ® vacuum chemical induction systems​, from Evoqua Water Technologies, at each of its chlorine addition points – one unit for continuous operation and the other unit for back-up.

The Water Champ system features direct vacuum chemical induction capability, thereby eliminating the necessity of conventional rapid mix systems. The units include a 15-horsepower chemical processing duty motor mounted to each unit with a vacuum body and airfoil-design propeller at the other end. Chlorine is injected through the body of the unit and is dispersed into the channel while being simultaneously mixed through the open propeller, creating a vacuum in the chamber directly above the propeller.

The Water Champ unit is capable of inducing chlorine directly into the process stream at velocities of up to 18 meters per second (60 ft/s), providing instantaneous mixing and diffusion. As a result, facility management says that chlorine induction is now more effective and efficient and halogen-based corrosion has been greatly reduced and is no longer a priority issue for facility maintenance personnel.

Due to the improved performance brought by the new induction system, the Seoul Metropolitan Government has since installed Water Champ vacuum chemical induction systems at all six of its purification centers.

2 Water Champ® systems, one for continuous operation and one for back up. 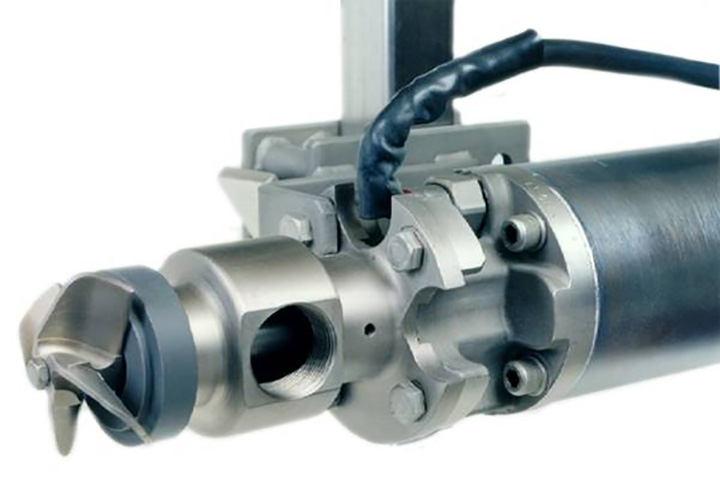 The Water Champ® Chemical Induction System is designed for the application and instantaneous mixing and diffusion of a variety of chemicals used in the treatment of water and wastewater.