Taking The Heat Out Of Cooling: Data Center Example

An increasing number of technology industries are turning to cooling towers to remove excess heat from buildings or processes. Server farms or server clusters are typically located between the system switches and routers, the removal of heat from these facilities is critical to their optimal performance. The advances in cluster computing, scientific simulation (such as Computational Fluid Dynamics), the rendering of detailed 3D images for health care, and the complex transactions required by web enterprises are all processed at server farms. The buildings cooling capabilities, rather than its processing speed, limit performance of the servers. In many cases for every 100 watts used to power the server, 50 watts is required to cool it. The critical design parameter for these large and complex continuous systems is performance per watt. As a result, maintaining effective and continuous cooling is critical to server performance.

Facebook has established a server cluster in Lulea, Northern Sweden (within 62 miles of the Arctic Circle), to benefit from the availability of cold air. High-speed fiber optic cables link the USA to cooler climates, such as Iceland. Google operates 12 data centers globally, with 6 in the USA, and uses 260 million watts of power, or 0.01% of global power consumption. Amazon operates 450,000 servers across 9 locations globally, with a 10th under construction in Ningxia, China. These complex, large scale operations require a great deal of cooling, and for some time now the trend has been to move away from the use of chemicals and towards non-chemical, more water efficient and critically robust disinfection processes. UV disinfection of the cooling water plays a central role in these process critical applications; preventing harmful microbial growth that can pose a danger to employees, while effecting the performance of the cooling system.

HOW DOES COOLING TAKE PLACE?

Evaporative cooling occurs when water evaporates, changing state from liquid to vapor and requires an input of heat energy - the latent heat of evaporation. The input of heat is drawn as a waste product directly from the server facility. Modern heat rejection requirements employ cooling towers or evaporative condensers as the most efficient and cost effective method, maximizing the contact between air and the water to be cooled.

Cooling towers used in evaporative cooling water systems and domestic hot and cold water systems are a common source of Legionella. The disease is transmitted via the inhalation of mist droplets containing the bacteria. The use of UV water treatment ensures that microbial contaminants are effectively inactivated, including slime formers that impair cooling tower performance. Unlike chemical disinfection systems, organisms do not demonstrate a tolerance or resistance to UV light. Typically, cooling towers require nearly 66% less power to reject a given amount of heat than alternative “dry methods”. In addition, they occupy a smaller footprint and are significantly quieter. Some server farms use reclaimed water for cooling, although all need optimal performance from their cooling loops.

Cooling towers evaporate pure water, leaving any suspended or dissolved solids, such as minerals etc., behind in the retained water. This resultant build-up of solids or concentration factor would leave the water unusable, reducing operating efficiencies and potentially damaging the recirculating system. In an effort to reduce build up, it is necessary to blowdown or bleed a proportion of the system water. In the US, the total dissolved solids (TDS) of the supply water requires that the concentration factor within an evaporative cooling system is maintained at 3 to 3.5 times, requiring an amount of water equivalent to up to 50% of the evaporation losses being bled to waste. For a typical MW (1,000Kw) of heat rejected, this equates to 150 to 200 gallons per hour that is drained to waste. Several novel approaches are being utilized for cooling water systems, including the use of reclaimed or wastewater for cooling in an attempt to reduce the use of potable water. The selection of filtration products that minimize backwash water loss is critical; as a result high efficiency media filters such as the Vortisand® Systems with Cross-Flow Microsand Filtration are specified for the most demanding applications.

Cooling towers are effective air scrubbers. As a consequence of the cooling method, they flush airborne contaminants into the system where they deposit on and foul the heat exchange surfaces. Suspended matter in the cooling water also supplies waterborne microorganisms with a supply of nutrients. Modern UV systems use automatic wipers to keep the optical path free from contamination. Many of these airborne contaminants, as well as iron in solution in the water, will foul the quartz sleeves and prevent optimal disinfection of the cooling water.

Particulates under 5 micron in size contribute to reduced cooling efficiencies by fouling the surfaces of heat exchangers. 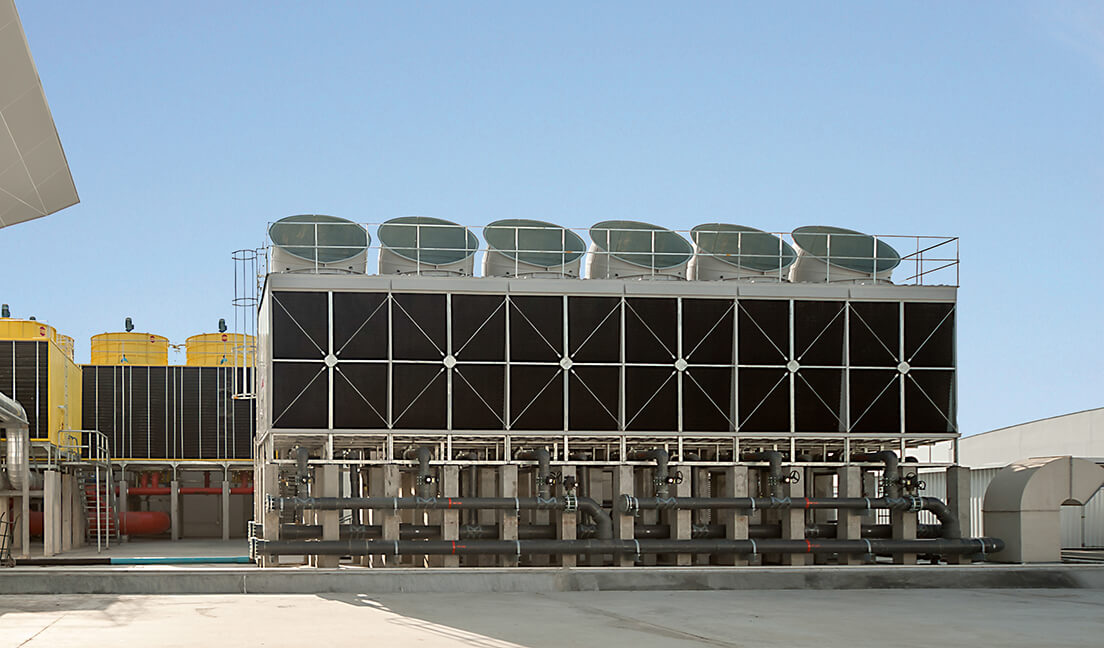 The dynamics of flora and fauna in cooling water systems are beginning to be better understood. In systems where a single microbial group or species dominates, fouling problems can often occur. In a balanced population mix, often little or no fouling is evident. It is probable that when mixed populations co-exist, they compete for the available oxygen and nutrients, and so control each other’s growth. When one group successfully displaces the others, its growth can proceed without competition, leading to the quick formation of biofilm and slime.

A wide variety of bacteria, including Klebsiella Pneumoniae and Bacillus Emegaterium, can colonize cooling systems. Spherical, rod-shaped, spiral, and filamentous forms are common. Some are spore producing to survive adverse environmental conditions, such as dry periods or high temperatures. Both aerobic bacteria (needing oxygen to survive) and anaerobic bacteria (such as Desulfovibrio Desulfurcans - SRB that can survive in the absence of oxygen) are found in cooling systems. The SRB species are directly linked to Microbial Induced Corrosion (MIC), as they metabolize Sulfur and form Hydrogen Sulfide as a waste product. This then leads to hydrochloric acid formation, causing corrosion of pipes and structures.

Several forms of fungi are encountered in cooling systems, including Candida Krusei and Trichoderma Viride. Filamentous molds will lead to rot of any exposed wood and as with yeasts; they are prolific slime formers that will impair cooling performance.

A high efficiency media filtration system and UV combination can remove contaminants before they have a chance of increasing the cost of operation, cause infection, and/or cause a shutdown situation. Earlier applications of UV, for cooling water loops, was to disinfect a side-stream flow. Modern, high capacity UV systems, when used with the correct separation processes, can deliver a high dose of UV to the cooling loop and turn over the entire reservoir frequently. A key benefit of UV disinfection is that the water cannot be overdosed.

Typically a cooling system will turn over the entire volume of water several times each hour. A typical reservoir might contain 7,000-15,000 gallons, with a filtration rate of 500 to 1,000 gallons per minute. A 100-ton cooling tower would recirculate the cooling water at 300-500 gallons per minute. Side-stream technologies are a lower cost, but a less effective method to disinfect the cooling system. Process critical applications such as server farms need to have full flow automated disinfection, operating 24 hours a day, 365 days a year.

Vortisand® filtration systems with high efficiency cross-flow technology is a replacement to the older, more traditional sand filters. The Vortisand system is a high capacity media filter that combines cross-flow dynamics with microsand media to achieve submicron filtration performance. This technology allows the unit to operate at filtration rates of up to 5 times greater than those of traditional media filters, while filtering 10-50 times finer. Water from cooling towers attracts and absorbs airborne contaminants on a continuous basis. Typically, 85% of suspended solids in chilled water and hot water loops are smaller than 5 microns. Studies have shown these small particles (5 microns and less) are the adherent contaminants fouling cooling tower and heat exchangers, reducing the performance of the cooling system. Bacteria, such as Legionella, also contribute to this phenomenon.

The Vortisand system typically requires 3-5% of the cooling tower flow, or a turnover rate of 7-12 depending on the tower location. Standard sand filters and centrifugal separators will require typically 10-30% of the cooling tower flow. Due to its particulate removal capabilities, the Vortisand system is an excellent pre-treatment filter for UV applications. High efficiency media filtration system and UV combination can remove contaminants before they have a chance of increasing the cost of operation.

Modern high efficiency media filtration and UV disinfection systems are capable of filtering the full flow of modern cooling loops, and disinfecting the entire water system many times each hour. Server farms are just one of many applications in which high efficiency filtration is critical to attaining optimal ROIs. Having an efficiently operating and clean cooling tower can lead to multiple benefits. Such benefits include a cleaner HVAC system, reduced maintenance costs and higher operating efficiencies. Industrial applications can also benefit; having a clean source of cooling tower water to pull from will help meet improved levels of production and quality.