The small unincorporated township of Stratmoor Hills is located in the foothills of Cheyenne Mountain in Southern Colorado Springs. It offers its residents stunning views, a lively cultural mix, and a convenient commute to the Fort Carson U.S. Army installation, making it a popular place for military families to live. The community’s water security is the responsibility of the Stratmoor Hills Water District (SHWD), which oversees a combination of surface and groundwater sources. Recently, SHWD and Evoqua worked together to develop an industry-first application of selective Ion Exchange filtration specifically aimed at countering the threat of PFOA and PFOS contamination in this otherwise pristine watershed.

The concern began in 2016, when the U.S. Environmental Protection Agency (EPA) issued a health advisory for perfluorooctanoic acid (PFOA) and perfluorooctanesulfonic acid (PFOS) in drinking water. The EPA’s advisory tightened limits for these two perfluoro compounds (PFCs) from previous levels of 400 parts per trillion (ppt) of PFOA and 200 ppt of PFOS to 70 ppt for single or combined concentrations.

In the Colorado Springs area, the new lower limits for these suspected carcinogens reportedly coincided with the discovery of PFC contamination in the area’s Widefield Aquifer. It was alleged and widely reported that the contamination originated at Peterson Air Force Base with its use of foams and the chemicals it contained, in firefighting training. The State of Colorado added a third PFC, PFHPA, to the EPA’s combined 70 ppt limit.

The lower limits and reported aquifer contamination led SHWD to evaluate its seasonal wells, which draw from the Widefield Aquifer and are used to supplement surface water sources during the summer. One of them was found to be above the new EPA limit.

“Up until the state added PFHPA to the restriction, our wells were all under the limit,” says Kirk Medina, District Manager for SHWD. With the change in regulation SHWD immediately went in search of a treatment solution.

To meet the requirements of treating for all three chemicals, Evoqua proposed an innovative system utilizing selective single-use ion exchange resin. Evoqua has pioneered the use of selective IX resins which have been extensively used in California and Massachusetts for removing perchlorate, a contaminant with similar electro-chemical properties to PFAS. 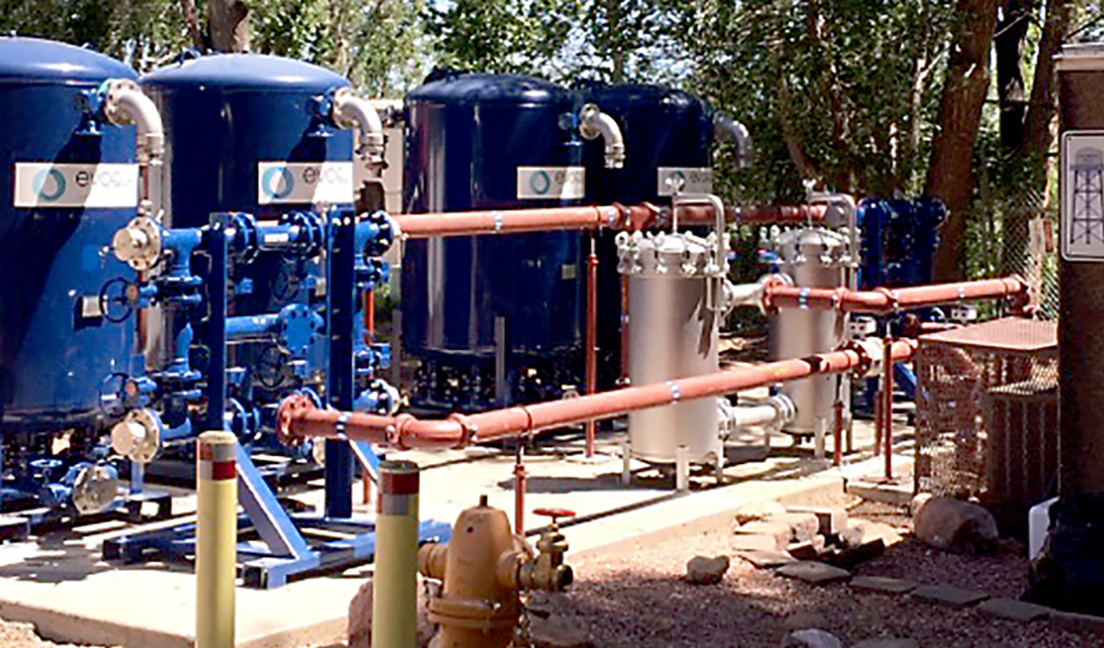 The success of an earlier pilot test at a neighboring water district gave the team confidence that Evoqua’s ion exchange solution would work as a first full-scale installation aimed at treating for PFOS, PFAS and PFHPA in the field. And the operating numbers gave the solution a compelling advantage. The footprint was small enough to be portable if SHWD needed to move it to a different well site.

With single-pass instead of regenerable resin, operating costs and on-site materials would be minimized over a 10-year lifetime. In addition, the ion exchange resin promised to be more suitable to the seasonal use of the well.

Based on the test results and the business case, SHWD decided to request a production-scale system from Evoqua. “When we approached the Air Force and told them that we preferred the single-pass ion exchange system that Evoqua was offering, they were open to that, and it was ordered,” says Medina. Close and active collaboration between the Air Force, SHWD and Evoqua resulted in fast delivery and fast setup. SHWD staff and the Air Force’s contractor worked together to pour the concrete pad, make needed plumbing modifications and install the system so that it could treat the contaminated well and also be moved to other sites if needs change.

Stratmoor Hills Water District was able to recover potable water from a PFOA/PFOS-contaminated well and distribute it to municipal customers.

The finished configuration includes four vessels that can be operated in single- or two-pass configuration. It processes a flow of 350 gpm and occupies a footprint of 200 sq/ft. “It’s been fantastic ever since it went online,” says Medina. “I like to say that it removes all of our PFCs to levels below detection limits of 2 parts per trillion … in other words, pretty much nonexistent,” says Kirk.

With the Evoqua system in place, SHWD not only met their goal for PFC removal but exceeded the EPA standards. “We were fortunate that Evoqua provided us with options,” says Medina. “We’re also grateful that Evoqua was able to expedite delivery so we could meet our production needs. And our staff appreciated the training Evoqua provided. It looks like it’s going to be a very cost-effective solution for addressing this problem that was a big concern to the community.”

A solution that provided effective results, was cost-effective, could fit a small footprint and be moveable in order to be stored during the winter months