Solution helps save over $300,000 in costs in its first year of operation

The project also included construction of new cooling towers with a 20,000 ton cooling capacity. Systems and their components were designed and constructed to achieve LEED® silver certification. Design began in January 2011 and the new CUP was completed by summer 2014. Clark/McCarthy was awarded the design-build contract to replace the airport’s central utility plant (CUP). Murray Company was the installing contractor and ARUP was the consulting engineers.

Water from cooling towers attract and absorb airborne contaminants on a continuous basis. Typically, 85% of suspended solids in both chilled and hot water loops are smaller than 5 micron in size. Scientific case studies1 have shown that these small particles (5 microns and less) are the adherent contaminants that lead to fouling of heat exchangers and a reduction in efficiency.

A reduction in fouling was a key consideration in the design of the cooling system for this project. Not only would significant savings in energy be achieved, but a reduction in submicron particles inhibits biological activity by removing a source of sustenance for bacteria.

In order to properly access filtration requirements, an LPA (Laser Particle Analysis) test was conducted on existing cooling tower systems, CHW and HHW circuits. The filtration challenge was clear: 95% of all system water TSS were smaller than 5 microns.

When designing the filtration system, the designers had initially looked at a system that combined a traditional sand filter with sweeper piping (typical filtration efficiency of 20 microns). Additionally, in order to filter particles less than 5 micron in size, a disposable cartridge filter system needed to be added.

J.D. Sales Company, representing Vortisand® systems, was invited by the contractor to bid on this project. It was immediately apparent that traditional sand filters could not achieve the required level of filtration. The additional use of cartridge filters would require frequent replacement (with additional labor and disposal costs), further increasing the maintenance costs. Due to the size of the particles, conventional centrifugal separators were an ineffective option.

A simple total operating costs (TOC) calculation3 was performed, clearly demonstrating that the Vortisand system would cost 7 times less to operate than the alternative solution. With an ROI of less than 2 years and substantial savings in operating costs, Vortisand proved to be the best filtration system.

1Muller-Steinhagen, H. (1999) Cooling-Water, Fouling in Heat Exchangers, Advances in heat transfer: 33, 415-4962Results may vary according to application and location.3*This TOC Analysis was based on: (1) Cost of water $.0045 per gallon, (2) Estimated additional cost of chemicals due to additional make up water, (3) Estimated replacement frequency based on 2 micron efficiency and side stream flow of 3,000 gpm, (4) Cost of electricity: $0.15/kWh, (5) Backwash flow rate per tank.  Specification required peak flow to sewer no more than 100 gpm.

95% of system water TSS were smaller than 5 microns 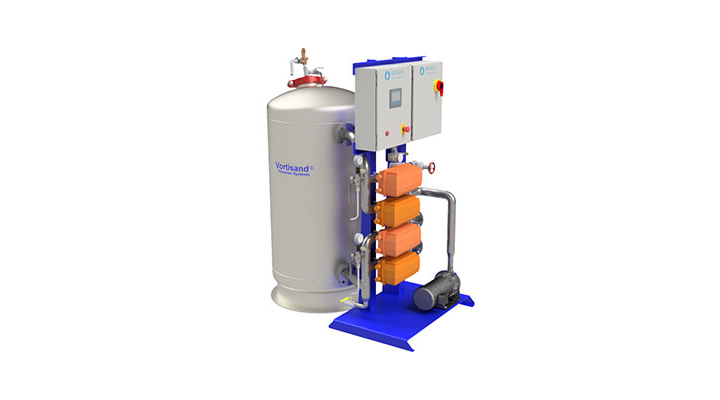