How can low concentrations be met in practice within the financial constraints in AMP7, Simon Radford looks ahead to where phosphorus removal might be heading.

In March 2019, Sir James Bevan, head of the Environment Agency, announced the unsettling news that a combination of population growth and climate change could leave the UK with severe water shortages in the next 20 to 25 years1. Predictions of population growth vary wildly but most estimates expect the population to increase to between 70 – 80 million by 2050, which represents about 15% growth on today’s figure. The Government has a target to reduce domestic water use from 145 litres per head per day to 130, about a 10% reduction, but that makes no allowance for changes in demand for water from industry and agriculture as a result of Brexit. Over the last decade we have seen changes in the pattern of weather as a result of climate change. Periods of intense rainfall leading to flooding followed by periods of drought make water resource management difficult and East Anglia has long been classified as a semi-arid area. There is also serious water stress in parts of south east England2. Clearly, then, it is absolutely essential that we protect our water resources for future generations, reducing consumption where it is possible, recycling and reusing water where it is not.

One of the biggest threats to water resources is eutrophication – the explosive growth of algae resulting in oxygen depletion, fish death and, ultimately, river death. This is due to the presence of nutrients (nitrogen and phosphorus) in lakes and rivers, much of which comes from agricultural fertilisers but there is still a significant contribution from sewage treatment works final effluents. In 2019, the Environment Agency reported that the “Eutrophication risk will generally increase in the future” as a result of climate change and identifies phosphorus as a key parameter3. Reducing phosphorus levels in agricultural run-off is one factor in water catchment management, and this is being addressed, but phosphorus levels in sewage works effluents still presents a major threat.

The Urban Waste Water Treatment (England and Wales) Regulations 1994 (UWWT), which aimed to limit the discharge of eutrophying nutrients to surface waters, are over 25 years old. The nitrogen limits set in the regulations are largely met by existing sewage works treatment processes, but phosphorus is still one of the most common cause of sewage works final effluent failures. This is in spite of efforts to reduce phosphates in domestic products like toiletries and washing powders.

The phosphorus limits set in the regulations were 2mgP/l for a population equivalent of 10,000 to 100,000 and 1mgP/l for larger population equivalents with a minimum reduction of 80%. Whilst this is not a legal analysis, it appears that these limits, although still in force, are largely superseded by the Water Environment (Water Framework Directive) (England and Wales) Regulations 2017 (WFD). The WFD is not specific about phosphorus concentrations, but meeting its environmental objectives will result in many sewage treatment works having to achieve lower phosphorus in AMP7. The UK industry has agreed technically achievable limits (TAL) of 0.5mgP/l for AMP6 and 0.25mgP/l for AMP7, although not all works will have to meet these. Although such limits do appear challenging to the UK market the process technology does exist. Such levels or even lower have been achieved in other countries. For example, in the USA some sensitive areas such as the Great Lakes and Chesapeake Bay areas have already set limits of 0.1mgP/l and invested in the appropriate technology to achieve such limits.

In addition to the demands of the new phosphorus limits, there is the increasing population. Even the most optimistic estimates will result in an increase in domestic wastewater flows of between 5-15% by 2050, so treatment works will have to be capable of handling higher flow rates in the future. Such increases in capacity will result in Water Companies requiring more investment in their works at a time when they are under significant pressure from Ofwat to reduce water charges for customers. The economic impact of Covid 19 will add further commercial pressure to this challenging situation. So how can these joint demands of low phosphorus concentrations and increased works capacity be met in practice within the financial constraints of AMP7?

Severn Trent Water has installed the first full scale BioMag® system in Europe at their Rugby Sewage Treatment Works, following successful trial4. It will allow an increase of about 25% in the works throughput whilst achieving compliance with the new phosphorus limit of 0.4 mg/l of total phosphorus. Ed Ruswa, Senior Process Design Engineer for Severn Trent Water says ‘A significant enhancement to the treated water quality and capacity for growth is going to be delivered by upgrading the existing sewage treatment works using the BioMag® system. Conventional treatment methods would have required a large expansion at a higher cost, but the BioMag® system will help Severn Trent deliver its customer funded objectives.”

There are two ways of removing phosphorus: chemical and biological. Traditionally biological processes known as Enhanced Biological Phosphorus Removal (EBPR), which are relatively complex both to install and operate, have been confined to large works whilst small works have generally used chemical precipitation with either aluminium or iron salts. Whilst biological processes have the obvious benefit of not requiring chemicals to precipitate the phosphorus, these processes on their own are unable to reach the new Phosphorus limits of 0.25 mgP/l for AMP7. In many cases, a further chemical precipitation process (“tertiary solids removal or TSR”) is required to achieve such levels. As a result, significant investment is going to be required in both the introduction of EBPR into the activated sludge process in combination with a separate, tertiary solids removal process. 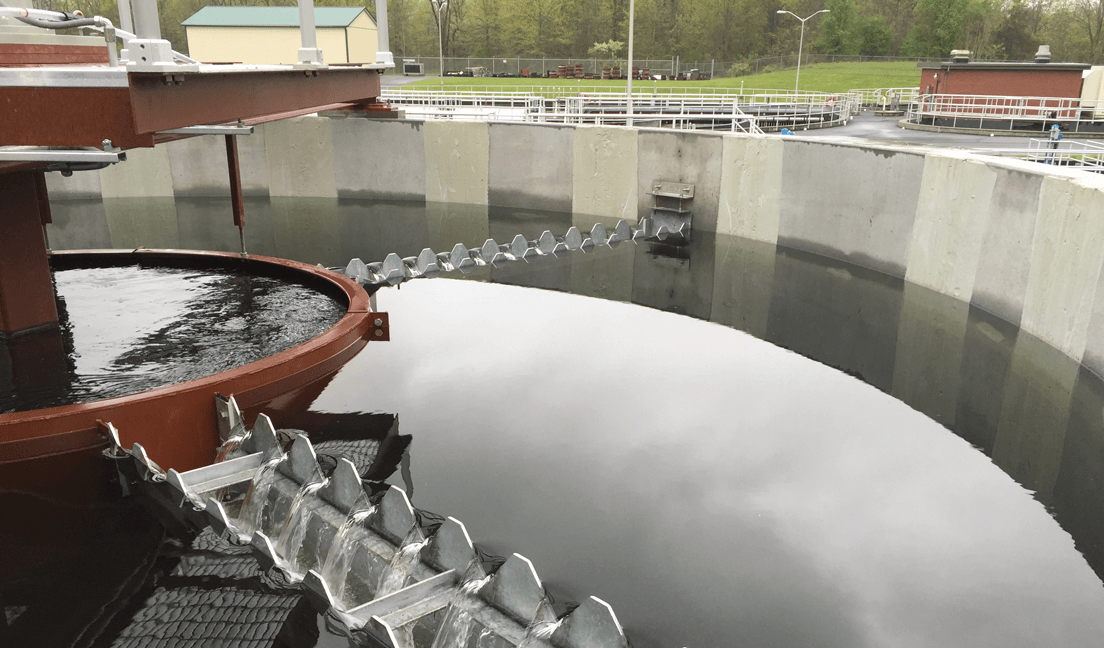 Evoqua has developed two approaches to enhanced clarification both of which use magnetite (magnetically susceptable iron oxide) as a ballast material to improve flocculation and settlement. The first, BioMag® system adds magnetite to the existing activated sludge or EBPR process. The heavy magnetite particles are incorporated into the biomass flocs, increasing their density and, consequently, the settlement rate.

This allows a much higher surface overflow rate in the clarifier and this means that an increased flow rate can be achieved though the existing final settling tanks. The increased settlement rate also allows the operator to use higher mixed liquor suspended solids allowing a higher organic loading capacity on the plant. The overall result is an increase in population equivalent load with no major construction works and only a very minor increase in works footprint. Adding a chemical coagulant into the BioMag® system itself achieves an effluent quality as good as that from a TSR process, meeting the new low phosphorus consents of below 0.25 mgP/l. The only additional equipment required is for chemical dosing and magnetite recovery from the surplus activated sludge by magnetic separation. This can easily be located in a small building anywhere on the existing site and can be easily retrofitted with minimum disruption to the operation of the existing plant. No additional final settling tanks are normally required so this approach maximises the use of existing assets and minimises capital cost. 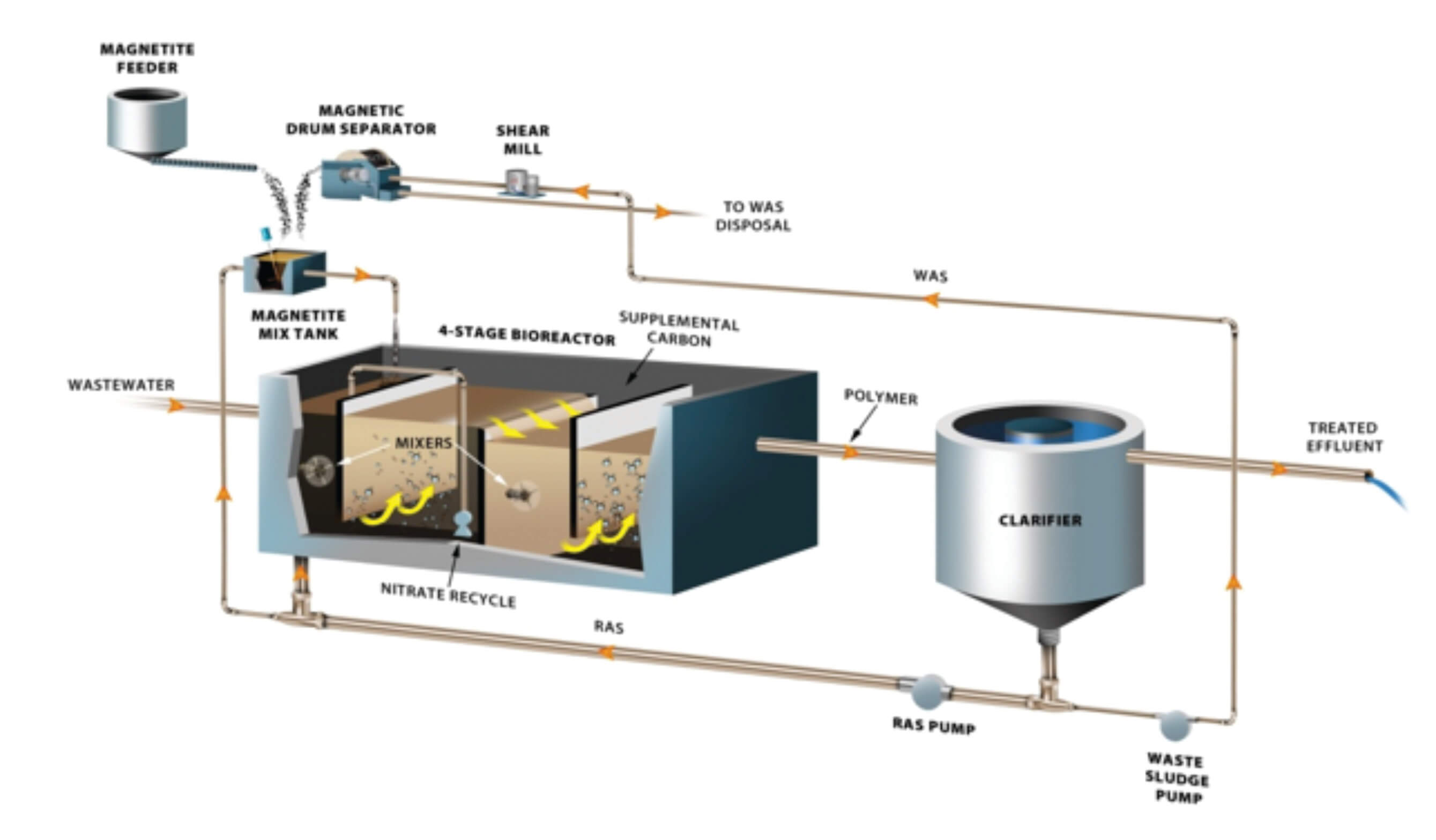 The second enhanced clarification process is the CoMag® system, a high rate clarification system for chemical precipitation. The principle is the same as BioMag® system in that magnetite is added with the precipitant chemical (in the UK this is normally an iron salt for phosphorus precipitation) then removed from the settled sludge by magnetic separation and recycled. The resulting weighted flocs also enhance “sweep flocculation”. The result is a final effluent with phosphorus concentrations as low as 0.05mg/l and TSS 2mg/l.

Whilst the CoMag® system is often adopted as a tertiary treatment process in the sense that it is downstream of an activated sludge process it can also be employed as an enhanced solids removal technology after trickling filters. In this case the effluent leaving the existing trickling filters is diverted through the CoMag® system reaction tanks for precipitation of phosphorus by coagulation and combines with magnetite and polymer before being diverted back to the existing humus tank for solids separation. As in the case of the BioMag® system, the retrofit option of the existing assets can be a far more attractive commercial alternative to building new significant assets where there is often insufficient space or access.

Evoqua’s magnetite ballasted enhanced clarification technology has been in use in the United States for over a decade and is now making a significant contribution to the UK water industry. Whilst every site is different, the projects which have been completed in the UK have shown that the process can often be retrofitted reusing existing assets to meet the new phosphorus limits. Enhanced clarification using magnetite addition not only improves effluent quality but the higher solids settling rates means that flow rates through existing clarifiers can be increased and this will often satisfy the requirements of future population growth. For new builds or extensions, enhanced clarification means a smaller footprint with resulting reduction in land requirements and associated investment costs.

If our water resources are to remain sustainable in the future, the water industry will have to take urgent action to reduce phosphorus in sewage treatment works final effluents. At most works, meeting the new Environmental limits for phosphorus as well as planning for future increases in capacity, will require new or supplementary process plant but, in many instances, this can be achieved by uprating existing assets. Experience shows that retrofitting ballasted clarification into existing biological processes can easily increase works capacity and the addition of chemical precipitation with enhanced clarification can meet the new phosphorus limits with minimal capital investment. Whether it is a retrofit project or new build, the technology fits well with the needs of water companies under pressure to both increase the capacity of works, reduce phosphorus levels to new EA targets and achieve all this within the demanding financial restraints of AMP7.

Simon Radford is a graduate of the University of Leeds, where he received a MEng in Chemical Engineering. After graduation, Simon launched his career at Tate & Lyle where he began as a product development chemist. On moving to Rohm & Haas in 1989 his involvement in the water treatment industry with ion exchange resins began. For the last 17 years Simon has been working in management for Evoqua Water Technologies. His expertise embraces membrane filtration for potable and waste water as well as ballasted clarification technologies.

Any opinions expressed are those of Mr. Radford and do not necessarily reflect the views of Evoqua.